The homie Dev over at ColdKnowledge found a questionnaire on tumblr and participated by answering the questions on a recent blog post (that you can view here).  His answers intrigued me, so I thought .. hey.. maybe I should take a stab at it myself.  Here goes nothing... 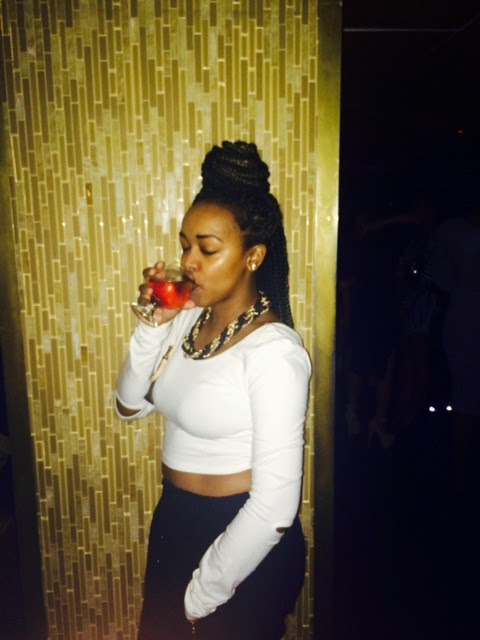 1.  First thing you wash in the shower?
Depends.  I try to switch it up to get my brain juices flowing.  Nevertheless, mostly.. the left arm pit.  Lol

2. Are you more of a coffee or alcohol drinker?
Presently, half and half- that includes equal on both actual consumption and the amount of consumption.
I prefer l’agua though.

3. Would you kiss the last person you kissed again?
No.

4. Do you plan outfits?
Sometimes.  Depending on where I’m going.

5. How are you feeling RIGHT now?
Well at this very moment… tired – mentally, physically, and emotionally.

6. What's the closest thing to you that's red?
Red binder to the left of me.

7. What would you do if you opened your door and saw a dead body?
I’ve had two deaths this month 7 days apart.  The last thing I want to think of is a ‘dead’ body.  But to be a team player of this, I opened the door and saw my uncle dead in the bed.  Let’s just say it’s nothing I EVER want to experience again… relative or not.  My reaction isn’t helpful to the situation to be honest…

8. Tell me about the last dream you remember having?
Last night, I was dating Wale o_O.. and took an extended lunch break from work so we could spend more time together while he was in town.. o_O

9. Three of your current feelings?
At this very moment...tired, annoyed, anxious.  What a combo. lol

10. What are you craving right now?
Candied yams and mac and cheese.

13. What comes to mind when I say cabbage?
That when I prepare it, it always gets good reviews :-).

14. When was the last time you cried? Why?
I had food poisoning a couple weeks ago and could NOT stop throwing up for hours.. like grossly.  I ended up shedding a couple tears.

15. If you could be a superhero, who would you want to be?
Ummm… is the Flash considered a superhero?  If so.. yea him.

16. Did the one person who hurt you most in your life apologize?
Nah.

17. Do you bite into your ice cream or just lick it?
Lick.  Unless cookie dough or cake is in it… then I’m biting that.

18. Favorite movie ever?
Get back to me on this one…

20. Have you ever met a celebrity?
Several (Shyne, Freeway, Amerie, Mya, ASAP Rocky, August Alsina, Terrence J, Teyana Taylor, Raheem DeVaughn, The Internet, Master P/Silkk the Shocker/C-Murder, and some more that’ll probably come to me later when I finish this.)

21. Could you handle being in the military?
No.  I would say why if I didn’t have the occupation I have. Lol.

22. What are you listening to right now?
Shane show.  Chiggidy chick chick.

23. How many countries have you visited?
Two by next month :)

24. Are your parents strict?
They weren’t really but I had rules that a teenager SHOULD have.  I couldn’t just do whatever tf I wanted.. although sometimes I tried (and failed lol),  Great structure. I hated it then.. but I’m ever grateful for it as an adult.

25. Would you go sky diving?
Have thought of it several times.

28. Is there anything you want to say to someone?
Nah.. it ain’t worth it.

30. Do you rent movies often?
I’ve been tipping into Redbox lately, but mostly no.

32. Name five facts about yourself.
1.  I read, write, and draw… a lot.
2.  HUGE heart... until I'm given a reason to be cold.
3.  I think about life and the world.. A LOT.  Wayyy too much.
4.  There are more than a few movies and sitcom episodes I can recite word for word… impromptu or during.  It trips folks out..
5.  I love music, food, and carnivals/amusement parks.  Oh and lets not forget the water...

33. Ever had a near death experience? If so, what happened?
Way too many.  Smh.  I’d care not to revisit them.  Thank the Lord for his grace and mercy.

34. Do you believe in karma or predestiny?
Karma is REAL.  You better believe it.

35. Brown or white eggs?
As long as they are scrambled with cheese… no discrimination here.

36. Do you own something from Hot Topic?
Couple piercing rings and a shirt.

39. If you were paid 1 million dollars to spend the night in a supposed haunted house, would you do it?
Am I alone?  If not, I possibly could.  Just would need to stay awake the ENTIRE time.  That money would be IT right now.

41. If you could shorten your life expectancy by 10 years to become more attractive, would you do it?
Hell nah.  I wanna ride this thing out as long as I can.

43. What was your favorite bedtime story as a child?
Frog and Toad.  I still have the book- it’s on my bookshelf in my place at the moment.

44. You’re walking down the street, you come across a burning building. A woman says her baby is trapped inside, what would you do?
I can only honestly answer this if I’m in the situation.  I have two different answers at the moment.

45. If you could choose the future profession of your son or daughter, would you?
Nah.

46. What was your best experience on drugs or alcohol?
LOL.

47. What was your worst experience on drugs or alcohol?
Passed out and woke up in vomit smh.  Charge it to the game of living and learning in college.

48. As your walking down the street you find a suitcase full of money sitting next to a parked car, would you take it?
Some of it…… *emoji eyes.  But then again.. depending on where I am… it could be a trap and I’d leave it be altogether.

49. If you found that a close friend has AIDS, would you still hang out with them?
Plot twist!  I don’t have any close “friends”...lol

50. In front of you are 10 pistols, 5 of which are loaded. If you survive you’d receive 100 million dollars. Would you be willing to place 1 to your head and pull the trigger?
NO.

51. How old were you when you lost your virginity?
Late bloomer.

52. Do you believe in ghosts, werewolves or vampires?
Ghosts, yes.  Well more like spirits.  The others.. nah

53. If you could live forever, would you want to?
At any age or just in general?

54. Which fictional movie character most resembles who you are?
Probably .. Billie Jean in The Legend of Billie Jean.  Well, that was the first character that came to mind.

55. If you could go back in time, which time period would you visit?
If I could go back to the 90s at this age… I would most def.  If it was just a time travel where I could do things over and continue from there… I’d go back to 2005.

56. If they were to televise a live execution, would you watch it?
NO.  And I can’t seem to grasp why others would want to.

57. If you could be the president of the USA, would you be willing to do it?
NO.  ‘They’ would try to have me assassinated within a week lol.

58. If you could choose the sex of your unborn child, would you want to?
Yes.  A boy.

59. Would you rather live longer or be wealthy?
Wealthy.  Living longer and being broke doesn’t seem like the business.