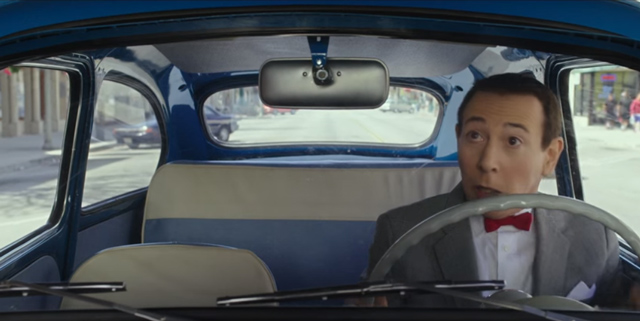 Coming from someone who can recite nearly the entire script of each movie (Pee-Wee’s Big Adventure and Big Top Pee Wee) … can we say .. excited?   Paul Reubens better known as Pee Wee Herman announced that he is releasing a new movie… titled Pee-Wee’s Big Holiday.  The movie is set to premiere at SXSW in Austin, TX and then will begin streaming on Netflix at 12:01 AM.. Friday, March 18th.  According to his site, the movie is described as :;

The new film stars the beloved fun-loving hero of TV, stage and film, ME!! In Pee-wee’s Big Holiday, a fateful meeting with a mysterious stranger inspires me to take my first-ever holiday in this epic story of friendship and destiny. The film stars me (!), Joe Manganiello (True Blood, Magic Mike XXL), Jessica Pohly (Stalker), Alia Shawkat (Arrested Development) and Stephanie Beatriz (Brooklyn Nine-Nine), and was directed by John Lee (Wonder Showzen, The Heart She Holler). Paul Reubens and Paul Rust (Comedy Bang! Bang!, Arrested Development) wrote the film, that was produced by Reubens and Judd Apatow (Trainwreck, Bridesmaids).

Watch the trailer below::

Email ThisBlogThis!Share to TwitterShare to FacebookShare to Pinterest
Labels: Trailer