Video: Head of GU, Chang Weisberg, addresses the cancellation of Rock the Bells

"We were really trying to pull off DC" 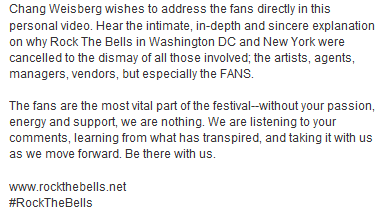 I will admit.. I still cringe whenever I think about the festival being cancelled. Even more, that it was just the East Coast festivals that were cancelled. The West coast had the chance to experience something I had been anticipating for MONTHS. When I received the email notification of an apology from the Chairman Head of Guerilla Union, Chang Weisberg, I rolled my eyes. I'm thinking why are you saying something nearly two months later. That's accomplishing nothing but a rehash of already ill feelings to disappointed fans. However, I was curious to hear what he had to say and watched the video. Unexpectedly, I'm glad I did.
While still disappointed at the results of the East Coast side of the festival ultimately, I have a much better understanding and level of respect of why he decided to pull the plug. Factors that probably never crossed our mind were addressed. All the rumors and speculation were ceased; I heard it live and direct from "the horse's mouth".
To not blame all the factors mentioned as the sole reason of cancellation, but verbally express that he takes 'full responsibility' speaks very highly of him. Aside from the intricate breakdown of what happened and what GU could have done to possibly prevent it, Weisberg's apology was truly sincere and THAT.. I can appreciate.
Rock the Bells 2014 you say???
Watch Below:

Email ThisBlogThis!Share to TwitterShare to FacebookShare to Pinterest
Labels: Rock the Bells Festival 2013