I got that Justin Bieber
Please believe it….

A new visual from Meek’s Dreams and Nightmares album.  I must say…Rick looks mighty sharp in here.  This is a good look for him.  I so miss Vegas.  Check this out:

Sn:  Over the weekend there was turmoil on Twitter regarding Meek and a fan.  I just happened to be lurking Saturday night and witnessed it all.  A fan was explaining her story (submitted to NecoleBitchie) of how she just met Meek after his show in Paris and asked for a picture.  In return.. he told her she could get a picture with him if she paid $100.  O_O.  The fan explained that she had no money and says he replied with No money No picture.  She couldn’t believe how cruel he was to her.  Necole retweeted it (that’s all.. NO commentary) and Meek took it upon himself to reply to her with “...sit ya nut ass down you not even bad! Lol”.  That was wack.  Not only was it wack to attack Necole just for
RT’ing it… but it was even more wack that after he tweeted that to her, he went on to justify him chargin $100 for a picture… “If I’m making a 100k a night fuck difference will a 100$ make if somebody else charge u for they services don’t knock me knock the hustle..” -__-.
These are ppl who paid their hard earned money to see you.. buy your albums.. support your music and this is how you repay them?  I am an enormous fan of Jay-Z and even with him being of the stature he is today… if I ever met him and he uttered that he was “charging” me for a pic.. he would get a nice lil piece of my mind.  Tuh!.. please.  To add more insult to injury, it was reported  that he showed up an hour late and only performed for 17 minutes smh.  He must think very highly of himself nowadays.  Sadly, without those fans that he seems to be non friendly with… he’d still be the scruff mcgruff running around Philly.  Ahhhh.. Homeboy needs a serious reality check.  Matter fact…I can think of a few other ppl who need one too.  It bothered me so bad, I had to blog about it.  So not cool :-/ 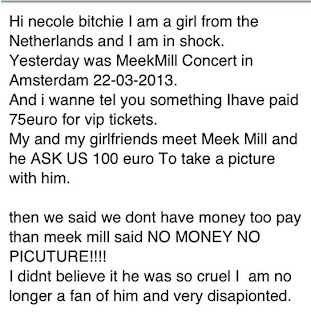