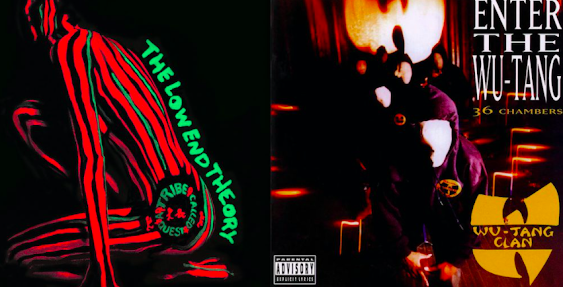 Each year, the Library of Congress selects a small quantity of recordings to archive in the National Recording Registry.  A few classic hip hop albums reside there so far such as Jay-Z's "The Blueprint", N.W.A's "Straight Outta Compton", De La Soul's "3 Feet High and Rising", Nas' "Illmatic", Dr. Dre's "The Chronic", Run DMC's "Raising Hell", and Lauryn Hill's "The Miseducation of Lauryn Hill".
Today, it was announced that ATCQ "The Low End Theory" (1991) and Wu-Tang's "Enter the Wu-Tang 36 Chambers" (1993) would be joining the archive.  The National Recording Registry deemed both “worthy of preservation because of their cultural, historical and aesthetic importance".
....Just keep feeding you... and feeding you x Come on everybody let's get with the fly modes is now officially stamped as a part of history.  Congrats to them both.
Related Post:  Q-Tip is welcomed by the Kennedy Center as the First Artistic Director of Hip-Hop Culture
Related Post: Wu-Tang Clan set to release 400-pound Photo Album
Posted by Dolcezza**Sw33t at 6:59 PM