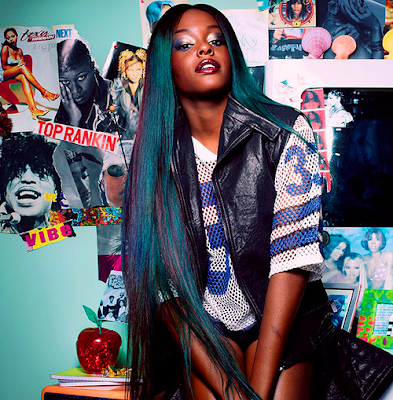 Controversial vibrant rapper, Azealia Banks, who just premiered her first album  "Broke With Expensive Taste" last year, is now dipping her hands into film.  Awesomely, Banks has snagged a lead role in a feature Lionsgate and Codeblack Film(s) directed by the legendary RZA from Wu-Tang Clan.  "CoCo", in which she will play the title character, is a Brooklyn-set drama about an aspiring rapper in her twenties who wants a career in hip-hop but is stuck between fulfilling her parents wishes to finish college.  According to Deadline, the film has a bit of an 8 Mile edge to it.
The film is said to feature Common, Jill Scott, Lucien Laviscount, Lorraine Toussaint, and Hana Maw Lee, with a script by Nicole Jefferson Asher and production by Paul Hall.  I'll keep you all posted as more information becomes available.
s.o. to DEADLINE.
Posted by Dolcezza**Sw33t at 10:11 PM