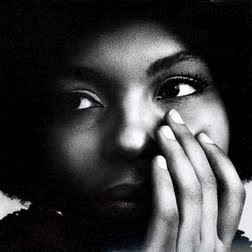 Roberta Cleopatra Flack, singer x songwriter x musician, was born February 10, 1937 in Black Mountain, North Carolina and raised in Arlington, VA. At the tender age of 9, Roberta began taking interest in playing the piano. She played the piano so well that she enrolled in Howard University at the age of 15, where they awarded her a full music scholarship. She graduated at age 19. Flack began to teach in Washington D.C. at Browne Junior High and Rabaut Junior High, in addition to teaching private piano lessons out of her home in NW. Aside from teaching, Flack served as a pianist for Opera singers at the Tivoli Club. During intermissions, she would sing Blues, Folk, and Pop music in a back room. Soon she served as her own pianist when she began to perform at the 1520 club.
Roberta Flack has created several duets with notable male singer counterparts Donny Hathaway and Peabo Bryson. She sang on the theme song of TV show ‘Valerie’ (aka The Hogan Family) as well as earning Gold singles and platinum albums from 1972 – present.
Her most notable recent works’ date back to February 2012 where she released ‘Let it Be Roberta’, an album of Beatles covers {she knew John Lennon personally as they both lived in the same apartment building in NYC in 1975 right across the hall from each other). Recognizably, she is a spokesperson for American Society for the Prevention of Cruelty to Animals (ASPCA) and the name of Hyde Leadership Chart School in the Bronx’s after- school program “The Roberta Flack School of Music”; Roberta also founded the school. The program serves as free music education to underpriviledged students.
Roberta Flack shares a common ground with music group U2 in record breaking as the only artists to win the Grammy ‘Record of the Year’ award in consecutive years. “The First Time Ever I Saw Your Face”, a duet with Donny Hathaway, won Grammy ‘Record of the Year’ in 1973. In 1974, she won the same award this time with her solo song ‘Killing Me Softly (with his song)’.
:
Circa 1983.
Continuing with our sample theme this month, Roberta was featured as the vocalist over Lalo Schifrin and Jerry Fielding’s score to film ‘Sudden Impact’; the sample used on The Game’s ‘Scared Now’ w/ Meek Mill.
Her powerful octaves gave this production LIFE.