'It's From the Sole' :: Andre McDonnell's Mission to Give Sneakers to the Homeless 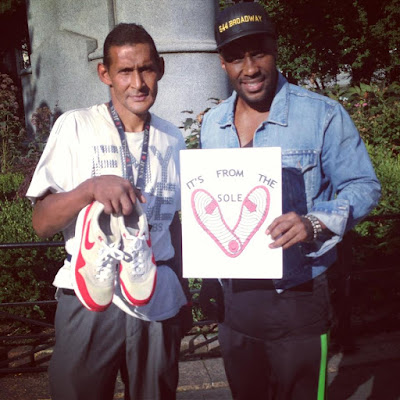 "I don’t want to do soup kitchens,  I love sneakers. We want to take the sneaker culture and utilize it in a positive way.
...Is there a religious message behind it? Of course there is. I’m blessing people. Things could be a lot worse for me, but I want to give my blessings back.”   - Andre McDonnell, Founder of 'It's From the Sole'. 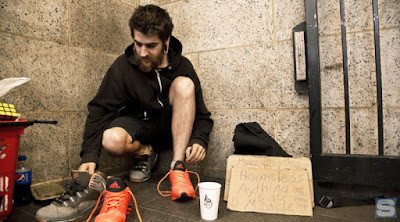 Three years ago, McDonnell was playing basketball and saw a homeless man without shoes.  At that point, he took his shoes off and gave them to that man.  Today, Andre McDonnell has turned that incident into a mission.
'It's From the Sole' is a non-profit organization that provides the homeless community with sneakers.  Not just any sneakers though.  The sneakers accepted from donors are new or gently worn.

"We change and clean the insoles and shoe laces to ensure that each sneaker looks as new as possible."

McDonnell has estimated that his four man organization has given away over 7,000 pairs of sneakers so far in the New York City area.  Unfortunately, even with such a great operation... things haven't been so easy to 'give' with a few hindering encounters.
They've been kicked out of public places by the police (when only trying to help people) as well as kick back from some in the homeless community.

"There's a sense of tone and persona from some homeless people.  There's people you could tell need your help, but he might have that 'Leave-me-the-hell-alone' face.  I've been spit at.  I've been called the N-word.  They've tried to grab my bag.  All kinds of crazy stuff has happened." 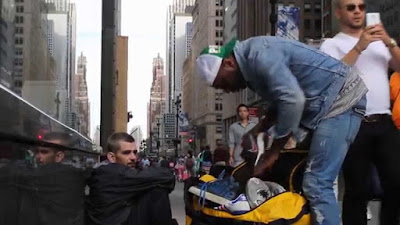 Even still, the org presses on with their mission and makes their rounds at Port Authority, Penn Station, and Grand Central terminal.   McDonnell maintains this op all while continuing to work as a full time stylist at NYC's Atrium Boutique.

To learn more about the org or how you can help, visit It's From the Sole.