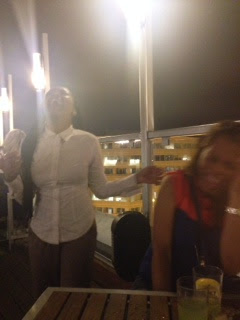 Laughter is so good for the soul.  Not sure exactly what we were laughing at, but there is about four photos of us cracking up @ something.  Good times.
Speaking of good times, I'm happy to say I added videos to quite a few of some older personal posts.  As you've seen in the most recent ones, videos will be added more often now.  I finally get to share the moments through photos AND visuals.  Enjoy.
I copied and pasted the links of the newly added ones below.
{Personal Post} Photos/Videos :: August Alsina Album Listening Session @ Park 14th , DC.
-  Four vids added of the interview and performances.


{Personal Post} Photos :: Camp Floggnaw Odd Future Carnival 2014 | Los Angeles, CA
-  I had a couple videos (including one where i'm singing 'Run to the Sun' by. NERD to Ebonie) but I decided to keep the others for personal keep and only posted my slide video on this one.  Funners

{Personal Post} Photos/Videos::  Summer Concert Series Pt. 2 - Tyler the Creator & Frankie Beverly x MAZE
-  Tyler's concert footage.  In a more recent post, I talked about how Travis Scott/Young Thug concert was the most turnt up I've attended to date.  I can certainly say, this was the runner up.

{Personal Post}  Photos/Videos :: Trillectro 2014 | Washington D.C.
-  2 vids.  Schmurda dances and a super turn up to 'Dreams and Nightmares'.  Cameos from Brent and Jerome.

Here's the link to view other Personal Posts
Posted by Dolcezza**Sw33t at 3:00 PM